in Uncategorized
by Maxx & Me Pet Rescue
0 Comments
#TheOrphans have survived a terribly tragic start to life. Their mother was hit and killed by a car when they were about a month or so old. When ACO went looking for the litter she obviously left behind, it was discovered only Fievel and Annie were survivors of the elements.
Having lived solely outdoors, parasites ran rampant in their tiny bodies and depleted them so completely that mange took hold. They’ve recovered BEAUTIFULLY from that ordeal and Annie is now ready to begin the search for her forever home!
{cue the Beyoncé music}
🎶 She’s a survivor and we aren’t gonna’ give up! 🎶
Annie needs another playful doggie in her home. She’s friendly and outgoing, now that she’s vaccinated, she’s taking walks in her foster neighborhood and charming ALL her neighbors. We don’t know what to call these babies other than ridiculously adorable so we aren’t sure how big they will get. For a long time, their bodies were so void of nutrients and extra calories, they stayed very small conserving the resources for healing instead of growing. Now that they’re healthy, they’ve started to thrive and are coming into their little bodies and blossoming personalities, finally!
Annie missed out on the healthy litter interaction and corrections from Momma so now that she’s feeling better, she’s also testing limits and figuring out who is boss, if growling means she doesn’t have to share toys, and if protesting when being picked up might mean she isn’t, in fact, picked up… we think a family with older kids is best based on this.
Applications for Little Orphan Annie @ maxxandme.org
{Fievel is recovering from knee surgery and will be available in about six weeks} 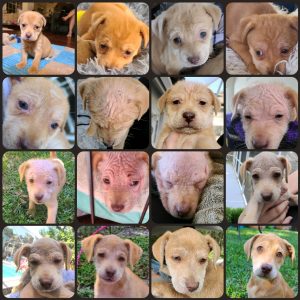